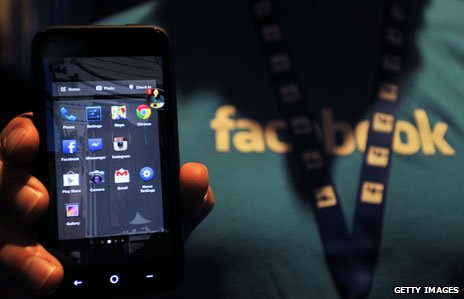 Want to enjoy Facebook in its most absorbing form? Then you need to get an Android phone, though you can expect adverts to be served up along with the experience. That, at least, is the advice of Sheryl Sandberg, Facebook's chief operating officer, who's in London this week.

In a briefing with technology journalists, the woman who is one half of the dynamic duo running Facebook - the other of course being Mark Zuckerberg - made it clear that mobile was now the company's be all and end all.
"To say that mobile is important to Facebook is the under-exaggeration of all time," she told us. For the first time last quarter, users had spent more time with Facebook on their mobile phones than on the desktop.
She admitted that the company had been late to get its mobile operation right and had made plenty of mistakes. The firm got underway in 2004 just before the mobile internet revolution took off - Mr Zuckerberg has said if it had been a couple of years later, he would have started it as an app - and the transition over the past year had not been painless.
"We made a pretty big bet on HTML5, hoping we could build our applications once and it would work on all the different operating systems," Ms Sandberg said.
But that had failed - and they had to start again building separate apps for Apple's iOS and Google's Android.
Now though, the new Facebook Home - in effect a skin you can install to turn an Android phone into a social networking device - seems to be right at the centre of the mobile strategy. Ms Sandberg said the openness of Android allowed developers and users to tinker with it in a way which was impossible with Apple's operating system, so Facebook Home wouldn't be coming to the iPhone.
When I asked whether this meant she would recommend users to go for Androids rather than iPhones, she was quick to stress that Facebook still worked very closely with Apple, and we'd soon see some elements of Home in the iOS app. "But we are certainly saying, Facebook Home is the most immersive and best state-of-the-art Facebook experience you can have."
And, as Facebook is an advertising business, the Facebook Home experience will have ads integrated into it - even when the phone is locked. "Putting ads there is exactly the same as putting ads into your newsfeed," she explained.
And while Facebook prides itself on being able to offer marketers targeted ads - such as 24- to 35-year-olds in Essex interested in motorbikes - she said there was a much simpler proposition behind its mobile advertising proposition.
"The size of the audience makes this - the phone - a mass medium. It's as important to a marketer as TV." She hammered the point home: "This is as important - if not more important - than television."
Having noticed adverts becoming more prominent in both the new newsfeed and in Facebook's various mobile apps, I wanted to know whether Ms Sandberg thought there was a danger of users reaching saturation point. 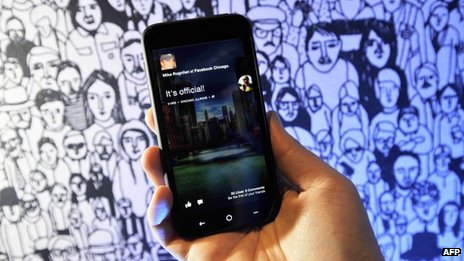 Facebook Home brings updates to a phone's home screen, rather than require users to check an app

She said Facebook monitored this by having a group which was shown no ads. They were then compared for their engagement with those who got the standard advertising experience. "So far, we're very pleased with the results."
A year ago, Facebook on a phone was an ad-free experience, which was causing some concern to investors. Now the company has become a big player in this new advertising market, but the chief operating officer was keen to reassure users that there were limits.
"Our goal is not to increase the number of ads you receive but to increase the usefulness of those ads to you."
The future of Facebook, then, is as a company fully integrated into your mobile experience, serving adverts that you enjoy as much as an update from your friends. If the Sandberg/Zuckerberg dynamic duo can pull that off, then the huge valuation put on their company last year may not look so outlandish after all.