Alibaba steps up battle versus Android with Amos OS 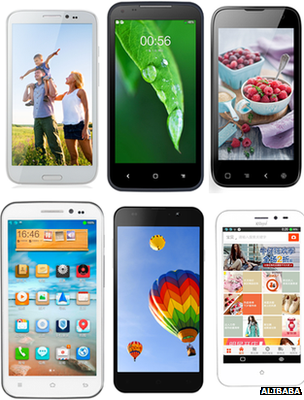 Alibaba unveiled six handsets from five manufacturers,
which will be powered by its operating system

Alibaba - China's biggest e-commerce company - has ramped up efforts to promote its mobile operating system.
The firm has set up a one billion yuan ($162m; £105m) programme to support app developers and is offering monthly payments to handset makers for every phone using its platform they sell.
A Chinese government report recently warned China had become "too dependent" on Google's Android operating system.
Alibaba previously accused Google of blocking Acer from adopting its system.
The Taiwanese hardware maker invited members of the press to an event last September to show off a new handset running Alibaba's Aliyun operating system (OS). However, on arrival the writers were told the event had been cancelled.
Alibaba later said that Google had threatened to "terminate Android product co-operation and related technical authorisation with Acer" if the launch had proceeded.
The search giant replied accusing Alibaba of using Android's development tools and other resources to create its software, adding that Aliyun's software store contained pirated Google apps.
As a result Google said that Acer and other members of the Open Handset Alliance (OHA) - which co-ordinates Android's development - would not support Aliyun unless it was rewritten to be fully compatible with Android in order to prevent the ecoystem from fragmenting.
Alibaba's OS subsequently struggled to find favour. Haier - a firm best known for its fridges and washing machines - became the best known brand to offer mobiles powered by the system.
However, Alibaba has now announced that five other companies are to begin selling handsets using its OS, which has now been rebranded Amos (Alibaba Mobile Operating System).
They are Konka, Zopo, Amoi, G'Five and Little Pepper. All five have previously made Android phones, but none are members of the OHA.
'Too dependent'
China overtook the US to become the world's biggest smartphone market last year.
Android accounted for 90.1% of the market in the July-to-September quarter, according to a report by research firm Analysys International. It said Apple's iOS had fallen to a 4.2% share and Symbian had a 2.4% share.

Google makes little money from Android's Chinese success - it does not charge manufacturers to use the system and most app sales in the country are made through local stores rather than its own Google Play marketplace and users prefer to use rivals' search engines. 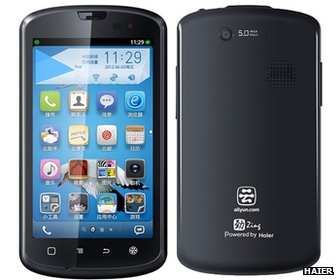 Despite Android's popularity, the US firm only accounted for 4.25% of all China-based web searches in February compared with Baidu's 70.49% share,according to research firm CNZZ.
Despite this, China's Ministry of Industry and Information Technology issued a research paper in March raising concerns about Android's dominance.
"Our country's mobile operating system research and development is too dependent on Android," it said.
"While the Android system is open source, the core technology and technology roadmap is strictly controlled by Google."
It added that China had the talent to develop a successful OS of its own, but stopped short of suggesting specific measures to bring this about.
Local tech firms Baidu and Huawei do market their own systems, but they are only reskinned versions of Android.
Credit checks
If Alibaba's Amos system does find success it could prove lucrative for the firm.
Phones installed with the OS access the company's own email, mapping and search services.
More significantly they might also help the firm bolster its mobile e-retail sales.
In total about 53bn yuan ($8.6bn; £5.6bn) of goods were sold via handsets in China last year - but Alibaba's chief technology officer recently told the Economist magazine: "Mobile is a new game where we don't have the edge yet." 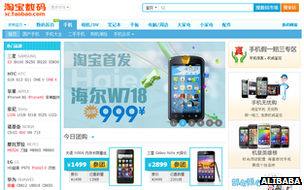 For now the company is taking advantage of its popular Taobao site to promote devices made by its partners. A new section dedicated to the handsets is being created.
In addition Alibaba plans to let some customers pay for their phones by subscription without needing to make an initial down-payment. It said it would use shopping and payment records from shoppers' activities on its own sites to check their creditworthiness.
It now hopes to attract more manufacturers through an offer to pay them one yuan (16 cents; 11p) per month for each Amos-powered phone they sell.
"Alibaba is a very established brand in China and has good relationships with the vendors and promotional channels they need to make this work," said Chris Green, a tech analyst at Davies Murphy Group.
"The challenge still lies in trying to crowbar its OS onto devices, though the subsidy now offered may encourage more handset makers to build dedicated devices. But even if Amos succeeds in China, it has little chance of catching on anywhere else."
Alibaba is privately owned but has signalled it intends to float its stock soon. Analysts say the company could be valued as high as $120bn.
10:12 AM
0 Comments

0 comments on Alibaba steps up battle versus Android with Amos OS :