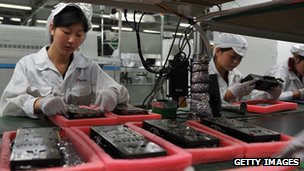 Microsoft has secured a patent deal with the world's biggest consumer electronics manufacturer to receive fees for devices powered by Google's Android and Chrome operating systems.

Hon Hai - the parent company of Foxconn - said the deal would help prevent its clients being caught up in an ongoing intellectual property dispute.
Microsoft says that Google's code makes use of innovations it owns.
Google alleges its rival's claims are based on "bogus patents".
However, the search giant's Motorola handset division has itself lost a number of legal challenges involving some of the disputed technologies which may have encouraged others involved in the smart device sector to settle.
According to the Foss Patents blog, which tracks such matters, this is thenineteenth announced patent licence deal Microsoft has secured since 2010 from companies whose products use Google's mobile and laptop operating systems.
Other firms to have agreed to pay royalties include HTC, Samsung, LG, Sharp and Acer.
Although the terms of the deal with Taiwan's Hon Hai have not been disclosed, patent law dictates that Microsoft cannot "double-dip" by charging both a product's designer and its manufacturer a full royalty charge.
So, in cases where Hon Hai makes an Android-powered smartphone, tablet, camera or television for a customer who has already signed a patent deal it will be up to the two parties involved to agree how the charge should be divided up.
Lawsuit threat

Hon Hai describes itself as the biggest manufacturing services provider to the computer, communication and consumer electronics industries. 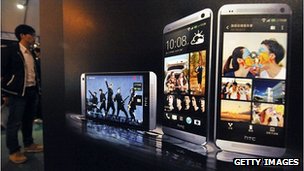 Forbes estimates the firm assembles about 40% of the sector's products.
"We recognise and respect the importance of international efforts that seek to protect intellectual property," Samuel Fu, Hon Hai's intellectual property director, said in a statement.
"The licensing agreement with Microsoft represents those efforts and our continued support of international trade agreements that facilitate implementation of effective patent protection."
The firm added that it owned more than 54,000 patents of its own.
The agreement comes just over two years after Microsoft announced it had filed legal action against the Asian firm in the US courts.
It said at the time: "The patents at issue cover a range of functionality embodied in Android devices that are essential to the user experience, including: natural ways of interacting with devices by tabbing through various screens to find the information they need; surfing the web more quickly, and interacting with documents and ebooks."
Had Foxconn lost the case it might have faced an import ban.
Last month Microsoft launched a Patent Tracker tool to make it easier for rivals to check which technologies it claims ownership to and suggested others introduce similar facilities.
According to the tech consultancy Asymco, Microsoft is likely to earn several times more money through its Android patents than it does from licences for its own Windows Phone system.
7:24 AM
0 Comments