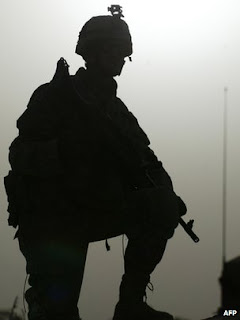 US service personnel will soon be using many
different mobile gadgets

Samsung phones running a secure version of Android have been approved for use by the US Department of Defense.

The approval is the start of a process that will see many different types of mobile devices used by US soldiers.
Approval for other Android devices as well as Apple phones and tablets is expected in late May.
Before now, ailing phone maker Blackberry was the only firm whose products were approved for use by US service personnel.

The approval of Samsung phones was the first step of a strategy that would let soldiers use many different types of devices, both smartphones and tablets, during their tours of duty, said DoD spokesman Lt Col Damien Pickart.
The approval would not necessarily result in orders for gadgets, he said, but meant different groups within the DoD could now buy the devices most appropriate to their needs.
The US DoD has about 600,000 smartphone users, said Col Pickart, about 470,000 of whom were using Blackberry handsets. The remainder was split between people using both Google Android and Apple phones in a series of trials to assess whether the devices could be used securely.

According to one report on Federal News Radio, the approval of other handset makers is part of a US DoD plan to more than double the number of secure mobile devices used by its armed forces by 2014. Alongside this will be built a secure system to manage all these devices and their associated app stores. Commercial bids to provide this are currently being assessed.
Blackberry handsets dominate within the US military because, before now, it was the only make to meet the Department's stringent security demands.
Samsung phones were among the first to win approval because of work done on a hardened version of the Android operating system called Knox that also met those security requirements. Gadgets that run Apple's iOS 6 operating system as well as other Android phones are currently undergoing testing by the Defense Information Systems Agency and are expected to be approved by the end of the month.
At the same time Samsung won approval, Blackberry 10 smartphones and Playbook tablets were also ruled safe to use on military networks.
3:18 AM
0 Comments

0 comments on US military approves Android phones for soldiers :