The Samsung Galaxy S4 wireless charging kit, which figures to be one of the most sought after Galaxy S4 accessories, has been revealed today in a few photos that show off the back plate that Galaxy S4 owners will have to use in order to take advantage of the Samsung Galaxy S4′s wireless charger.
Read: T-Mobile announces Samsung Galaxy S4 for May 1st release
Earlier this month, Samsung announced the Galaxy S4, a device that will be arriving in late April in the United Kingdom, and presumably in May for carriers in the United States. At the event, Samsung not only detailed the phone itself – including its 5-inch display, quad-core processor, 13MP camera and more – but it also detailed a number of different official accessories that will be coming for the Galaxy S4. 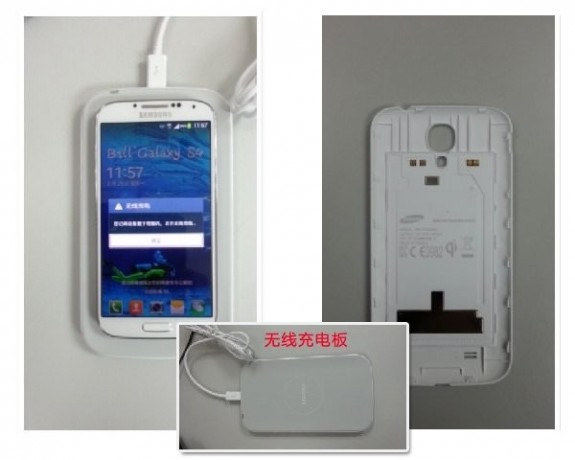 Among them, a wireless charging kit that will allow Galaxy S4 owners to charge their device without the need for wires. This is something that Samsung promised for the Galaxy S3 last year, but could not deliver. With the Galaxy S4 though, it looks to be more than just a bold claim.

At the launch event, Samsung allowed us to go hands-on with one of the elements of the Galaxy S4′s wireless charging, the Wireless Charging Pad/Cover which is currently listed on Samsung’s official Galaxy S4 website. However, what it did not reveal was the wireless charging back that Galaxy S4 owners will have to use in order to wirelessly charge their device. 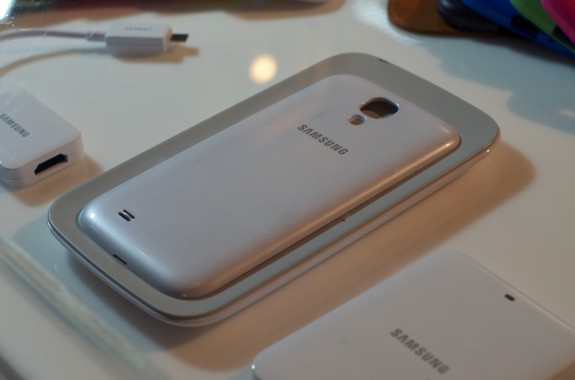 The Galaxy S4 will feature wireless charging, thanks to accessories.

Unlike devices like the Nexus 4 and HTC Droid DNA, the Galaxy S4 sports a removable back that will have to be replaced with one that offers support for wireless charging. And while Samsung hasn’t shown it off yet, a leak from CNMO shows off not only the back plate but the wireless charging pad as well.
The images show how the process will work. Users will need to replace the back plate and then use the wireless charging pad, which needs to be plugged in, to charge the device without wires. It will likely have embedded magnets to help attach the phone to the wireless charging pad.
The Wireless Charging Kit is supposedly going to arrive sometime between April 22nd and April 28th for $49.99, or shortly after the Galaxy S4 arrives in the United Kingdom.
Samsung has not confirmed that pricing or that date.

Great blog. Your blog is interesting and so informative. Wait for your next blog post.
Samsung Wireless Charging

Thanks for sharing such kind of nice and wonderful collection......Nice post Dude keep it up.

I have appreciated with getting lot of good and reliable and legislative information with your post...... .Get wireless charging pad Click here wireless-charging-pad