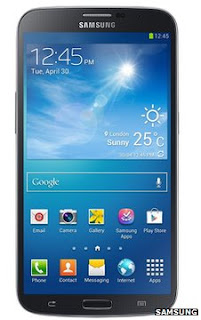 Samsung has unveiled the biggest smartphone to date - the Galaxy Mega, which features a 6.3in (16cm) screen.
The firm suggested its size made it ideal for watching videos or running two apps alongside each other.
Samsung helped popularise the so-called "phablet" category - in which phones approach tablet dimensions - with its original 5.3in Galaxy Note in 2011.
That proved more popular than many expected, but one analyst suggested the latest device might be a step too far.
Samsung is marketing the Android-powered handset as having a high-definition screen - however, a spokesman was unable to confirm whether it supported 720p or the "full HD" 1080p resolution.
Another South Korean firm, Pantech, currently lays claim to offering the biggest "full HD" smartphone with its 5.9in Vega No 6 which was announced in January.
China's Huawei had previously boasted having the biggest largest-screened 720p smartphone with its 6.1in Ascend Mate.
'Too cumbersome'
Samsung suggested that, despite its dimensions, the Galaxy Mega was still small and light enough - at 199g (0.44lb) - to fit into users' pockets and be used with one hand.
However, the firm is hedging its bets by offering a smaller 5.8in-screened version as an alternative.
Both will go on sale in May, with Europe and Russia the first regions to be offered the devices.
Tech consultancy Davies Murphy Group said that within the Android market there had been a notable shift towards people wanting to buy a single device rather than both a smartphone and tablet.
However, its principal technology analyst, Chris Green, suggested that at 6.3in it would be a "folly" for most users to swap their current handsets for the larger of the two Galaxy Megas.
"There is genuine demand for larger smartphones - the problem is at what point does a smartphone turn into a tablet," he told the BBC.
"When you've got this up against your head you'd have to argue you're using a tablet and not a smartphone - it's definitely going to compromise its functionality because it's simply too big and too cumbersome to use as a traditional telephone device.
"But ignoring the phone functionality, as far as the rest of the smart device goes it looks quite phenomenal."
Samsung was the most popular smartphone maker in 2012 accounting for 30.3% of all shipments, according to analysts at IDC.
Its rival Apple - whose largest handset has a 4in screen - came in second with a 19.1% market share.
4:23 AM
0 Comments