Google Play Services is our platform for offering you better integration with Google products, and providing new capabilities to use within your apps. Today we’re rolling out Google Play services v3.0, which includes Google+ Sign-In and Google Maps Android API improvements.

Google+ Sign-In lets users sign in to your Android app with their existing Google credentials, and bring along their Google+ info for an upgraded experience. In addition to basic authentication, today’s release includes features that can accelerate both app downloads and engagement. 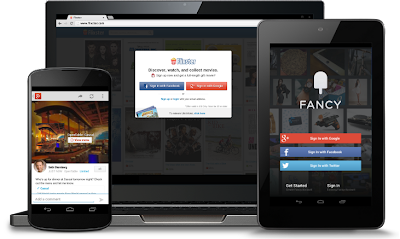 After signing in with Google on your web site, users will now have the option to install your Android app on their devices instantly. They’ll enjoy a seamless desktop-to-mobile experience, and you’ll be able to drive more downloads. Linking your web site and Android apps is as simple as registering your project and clients with the Google APIs console.

When users sign in with Google, they can now bring their Google+ info with them (like their public profile, and the people in their circles). This lets your app welcome them by name, display their picture, connect them with friends, and lots more.

Shares from your app can now include calls to action (like “listen,” “RSVP,” and “check-in”), custom thumbnails, and brand attribution — all of which help them stand out in users’ Google+ streams. Clicking on an interactive post can also deep link to a specific piece of content inside your app, further improving engagement.

Users’ app activities will only be visible to the Google+ circles they specify (if any), and they’ll only appear when they’re relevant. Putting users in control, and not spraying their stream builds trust in your app, and encourages meaningful sharing.

Once your Google+ Sign-In integration is live, you’ll be able to measure and monitor downloads, total users, interactive post performance, and other key metrics. To set up Google+ Platform Insights for your Android app, simply connect it with your Google+ page.

To learn more about integrating with Google+ Sign-In, visit our developer docs. You can also read our announcement on the Google+ Developers Blog, or download some of the first apps to include this functionality.

This release includes fixes for more than 20 bugs, including half of the top 10 issues filed in the Google Maps API issue tracker. These include improvements to map rendering and the behavior of markers and infowindows.Also included are features like native support for new map shapes such as circles, anti-clockwise polygons, and the OnMyLocationChangeListener event, which is called when a change in location is detected. Check out the product documentation for a complete set of release notes.

To learn more about Google Play services and the APIs available to you through it, visit the Google Services area of the Android Developers site.
5:47 AM
0 Comments